Congruent Solutions is a winner of the ‘GREAT Tech Rocketships’ initiative that fits the 3 Fs criteria- good Founders, strong Fan-base and Funded

This first-of-its-kind global competition, a consortium of entities – UK Trade and Investment, iSPIRIT and Tech Hub have launched the ‘Great Tech Rocketships’ initiative. This was a global call for ideas and submissions from entrepreneurs who want to change the world, and have the potential to be fast growing “Rocketships”.The initiative ran across 5 cities (Bangalore, Chennai, Pune, Hyderabad and New Delhi).

Of the five companies which won out of the 289 that applied, two had been Chennai’s own — Congruent Solutions and Frilp. Congruent Solutions’ CORE AE – an auto enrolment solution aimed at the UK pension regulation, had been identified as a prospective ‘rocketship’ for its potential to disrupt the UK retirement services industry. 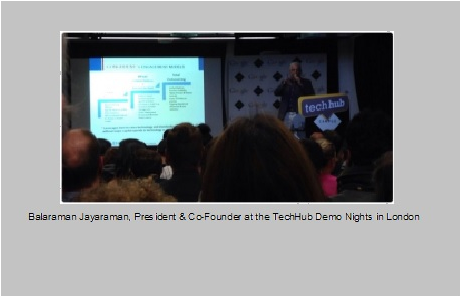 Along with the other winners of the competition, Balaraman Jayaraman, President & Co-Founder, Congruent Solutions spent a week in the U.K., as part of the UKTI delegation to demo the Congruent’s CORE AE product at one of the TechHub Demo Nights in London and also tour the local technology ecosystems; meet other entrepreneurs, network and exchange notes on the product propositions to fit those markets.

GOV.UK has quoted Balaraman Jayaraman President and Co-Founder of Congruent Solutions as saying “It was a privilege to be chosen as the GREAT Tech Rocketship. We have had very fruitful meetings and exposure during the demo night. But the highlight truly was our visit to Manchester organised by the UKTI. I was very impressed by the support that is being provided. Thanks for the opportunity!”

Watch the Highlights from the UKTI, Chennai event:
https://www.youtube.com/watch?v=fPD3NY4OhmI