‘Billion Dollar Babies’ Recognition – Another feather in the Congruent’s Cap

Congruent Solutions has been recognised as one of the “Billion Dollar Babies” in future by TiECON 2014 Chennai among the four companies. TiE Chennai, a part of The Indus Entrepneurs, a global not-for-profit organisation that nurtures entrepreneurs.

The objective of this program was to showcase the organizations that have started from scratch and have the potential to turn into a billion-dollar business with a global presence.

There were about 350+ companies who were recommended / identified by a few city based investment bankers as the likely companies to hit a Billion Dollars of revenue or valuation in the next 5 years.

These were evaluated by a committee consisting of M S Jagan, a leading Management Consultant in Chennai, Prof. T.N Swaminathan, Dean of Marketing of Great Lakes Institute of Management, and R Narayanan, a serial entrepreneur and an investor in Chennai Angels. This committee shortlisted 12 companies for the next phase in the evaluation.

R Narayanan, Chairman, Programme committee for the event, addressing a press conference on the event, said that the final round was judged by an independent jury consisting of Mr. Anup Bagchi, MD & CEO of ICICI Securities, and Mr. Ashwin Narasimhan, MD – Global Corporate and Investment Banking, Bank of America. They went through all the information submitted by the respondents and followed it up with an interview with each of the shortlisted companies’ CEOs. From the list of 12, they chose 4 companies most likely to be the Billion Dollar Babies from Tamil Nadu and we are naturally excited to be one of them.

Balaraman Jayaraman, Co-Founder & President said “This is a recognition for having embarked on a arduous journey of building an ERP class product Enterprise technology platform (CORE) for the retirement / pension industry and having succeeded in the most demanding of all product markets, the US. It is also an external validation and reinforcement of our own belief and conviction that we are on a very special mission and a huge value creation exercise “.

Anup Bagchi, CEO, ICICI Securities said “We received more than 350 nominations. We narrowed it down to 12 and from that, four were shortlisted… Somewhere we hope they can motivate other companies”. 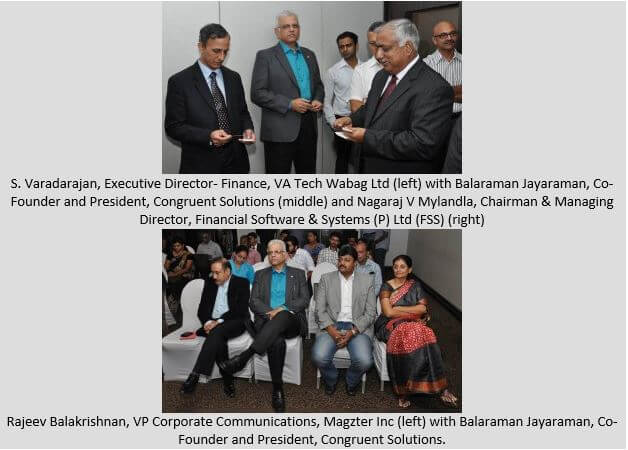