Blockchain in the Retirement & Pension Industry 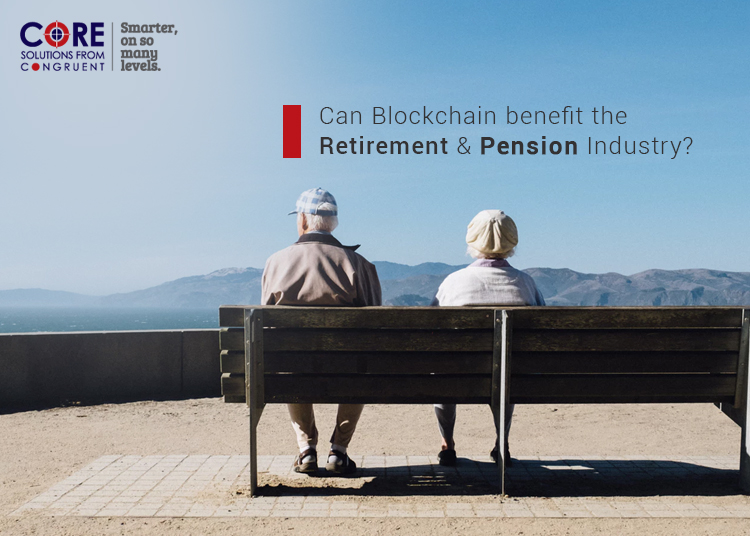 The psychobabble around the term Blockchain has people believing that it will revolutionize the way systems, companies, and even the internet will work. It is touted as the next big thing with almost Quixotic expectations. Popularized by Bitcoins – many technology and finance companies are now evaluating where they can use blockchain, almost as if to suggest that we are finding problems to fit the solution.

Let’s start with defining what this technology is, then explore the advantages and disadvantages, and finally see if it can solve for any real-world problems in the retirement industry.

A blockchain is simply a decentralized and distributed database, that can maintain the same information across multiple nodes or instances. The entire block functions on some pre-agreed rules on how data or transactions are bundled, how data can be added, transferred etc.

What it does, is that it eliminates the need for an intermediary or third party for secure transfer of information or authenticating a transaction – governed by the blockchain protocol. All the instances and nodes in the chain will stay complete and consistent with all the transactions processed, even when that instance or node does not take part in a transaction.

Let us now look at some of the distinctive features of the blockchain and see how this would play out in the current setting of Retirement and Pension plan ecosystems:

a. Decentralization and Disintermediation:
The question really is: Is it better to have a decentralized protocol governing your data? Decentralization of data really is quite impractical as we need central or intermediary governing bodies for plan administration, governance, regulation, trust services etc. with each of them providing different services.

Further, the advantages of decentralized storage such as “no single point of failure or breakdown” can be solved for using existing cloud services. Any cloud provider today is able to provide extremely high reliability and availability.

b. Security and Integrity:
The security layer in a blockchain is governed by cryptography/ hash algorithm. (Bitcoin uses the SHA256 algorithm). This does not provide any added advantage as hashing algorithms can be used outside the blockchain as well.

Blockchains have their own set of security concerns as highlighted by the cyber-attacks on cryptocurrencies such as such as the 2014 collapse of one bitcoin exchange and the more recent hacks of others such as Ethereum. Also Read about ‘51% attack’, which is a security flaw in blockchains.

c. Immutability:
Immutability literally means ‘unable to change’. Any transaction/ data written into the blockchain cannot be altered, or reversed. While, this is not literally true – transactions can be reversed using what is called a fork or through a consensus within a private blockchain – they are not the best ways to reverse a transaction as the fork will affect all other transactions that have taken place since the fork. Plan administrators will concur that adjustments are essential in a real-world scenario, and immutability will prove to be less favorable than suggested.

d.Smart Contracts:
Smart contracts have taken off since the release of Ethereum (a blockchain based platform enables people to build and deploy decentralized applications). A smart contract is simply a software controlled self-executing contract, written into a blockchain or any other application that can facilitate the exchange of data, money, content, shares etc. automatically without the need for a central authority. Smart contracts are accurate and tamper-proof. For example: A transaction between a buyer and seller – without the need for an intermediary like PayPal.

There are some areas like trading, fee processing or dividend processing where we can use smart contracts efficiently. (This is not a new concept. Read the paper on Smart Contracts (1995), published by Nick Szabo an American Scientist)

There are some limiting factors of blockchains to consider, where all nodes have to be updated with the transaction details, resulting in increased transaction completion times (a bitcoin transaction today can take upwards of 30 minutes), and the size of the transaction history that is to be maintained at each node.

Another constraint today is with Inter-operability. Most of the work on blockchain development today is happening in private block chains, and these small networks are limited by the confines of their environment.

There is one area that readily lends itself to benefit from a blockchain based solution – Reconciliation.  This is easily one of the biggest pain areas in our industry, and the ability of blockchains to have the same data present across multiple nodes eliminates the need for reconciliation. Many banks have already started work on blockchain related reconciliation projects, some logistics companies are using blockchains to track items on their supply chains.

The retirement industry has inherently been a little slow in the adoption of new technologies, and I do not see the blockchain adoption happening in a hurry. We will need to prudently weigh the advantages it offers, and decide on the specific functions that can benefit from blockchain.

Adoption should be carefully planned to ensure easy acceptance across the board, and facilitate inter-operability to ensure we reap the maximum benefits from wide adoption and push for standardization which we are dearly lacking.

BLOCKCHAIN| BLOCKCHAIN IN THE RETIREMENT|